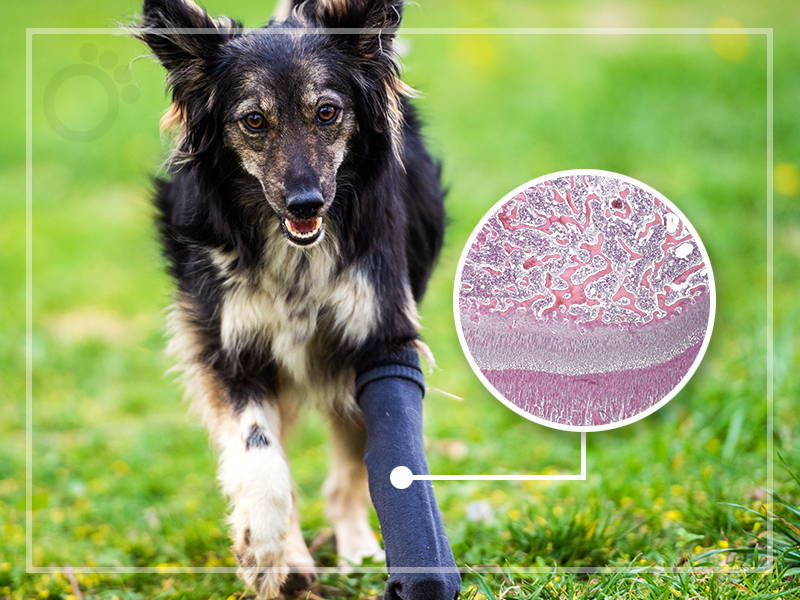 Orthopedic surgeries in dogs are some of the most common reasons for vet visits. They can be due to an acute incident (e.g. an accident causing a bone fracture) or a chronic condition (e.g. wear and tear of joints over time leading to arthritis). Treatments for fractures, osteoarthritis, or joint problems in dogs are usually divided into surgical and non-operative treatments.

Surgical treatments can range from arthroscopic cleaning of a joint all the way up to total joint replacement. Tissue engineering (replacements of tissues) and cartilage grafts are also in current practice. Non-operative treatments include physical therapy and lifestyle modification. A combination of treatments is often recommended to expedite a dog's road to recovery. 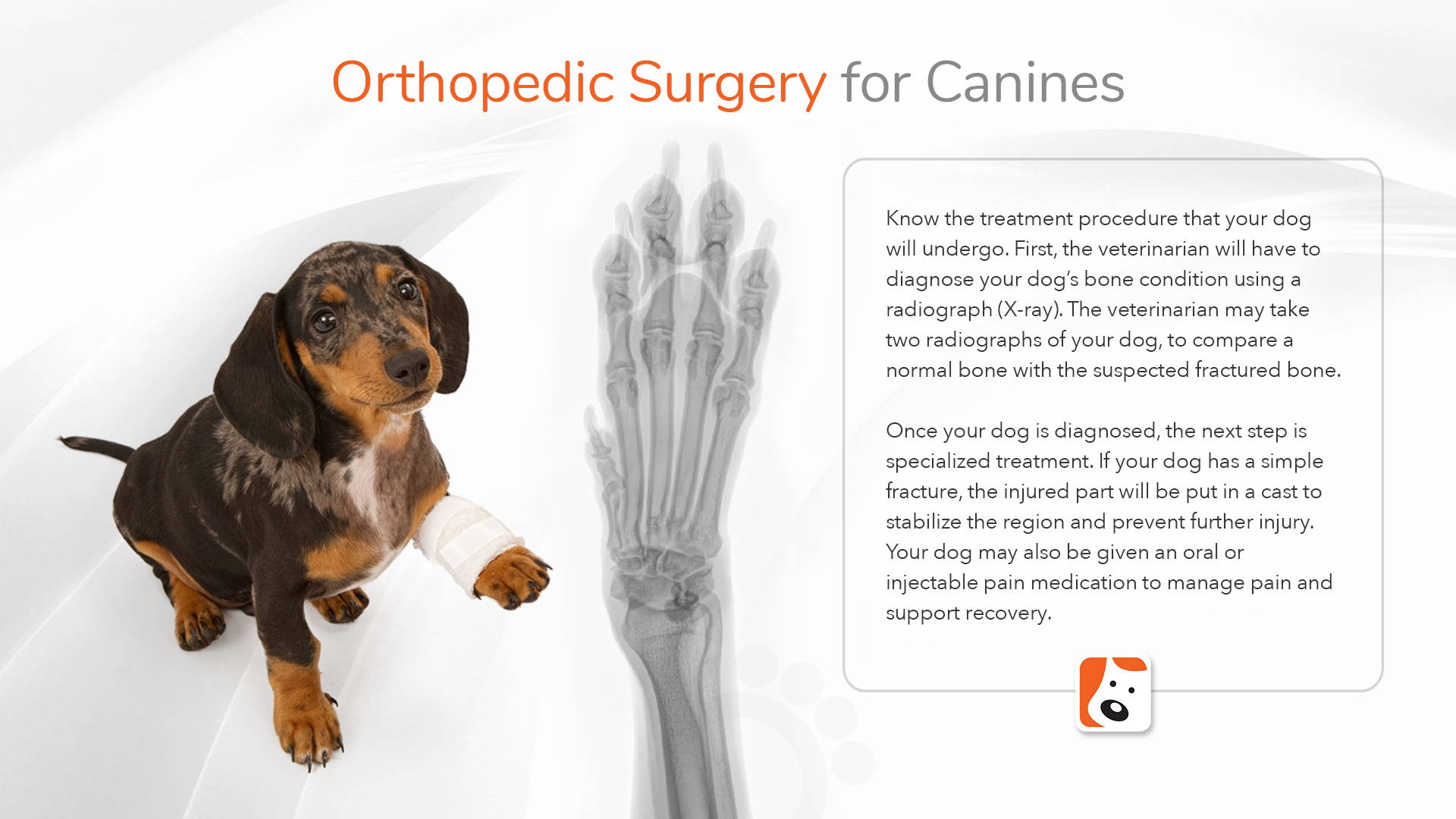 Surgery for Broken Bones in Dogs

A wide range of procedures are available to treat canine bone fractures. These protocols often depend on the size, breed, and age of the animal. Simple (non-displaced) fractures can be repaired by external coaptation (ex. splints and casts). Compound and complicated (displaced) fractures generally require some form of internal fixation that use various types of hardware, such as plates, rods, nails, pins, wires, and screws for stabilization.

The purpose of the skeleton is for support and your dog loses this support when the fracture occurred. Fortunately, the body has the ability to heal the broken bone if conditions are proper. The purpose of the surgery is to reduce (align) the broken bone and stabilize (fix) the fragments. The stabilization is achieved with a stainless steel implant. The type of implant used will vary depending on the type of fracture. The risk of infection, nerve and blood vessel injury, and non-union of the bone increases exponentially with each surgery that is performed.

Ligaments are strong, dense tissues in the skeletal system that connect the ends of two bones across a joint. Their function is to stabilize a joint. The most common knee injury in dogs is rupture of the Cranial Cruciate Ligament (CCL), also frequently referred to as the Anterior Cruciate Ligament (ACL). According to Vet Surgery Central, more than 600,000 dogs in the U.S. have surgery a ruptured CCL every year. The CCL plays a critical role in stabilizing the stifle of a dog (known as the knee in humans) against front-to-back forces. It prevents the tibia from shifting in front of the femur, controls excessive internal rotation of the joint and hyperextension, and is the structure most commonly injured.

Accordingly to Veterinary Partner, this is the procedure for a TPLO Surgery. "Before surgery, an x-ray of the stifle is taken to measure the angle at the top of the shin bone, called the tibial plateau angle. The goal of the surgery is to reduce this angle so that dynamic joint instability (cranial tibial thrust) is eliminated. This is usually accomplished by creating a post-surgical angle of between 4 and 10 degrees, an angle not much different than is found in the human knee. In most cases the surgical procedure starts with an exploration of the inside of the stifle joint. This can be done arthroscopically or with open joint surgery. The purpose is to assess the meniscal cartilages for any possible damage. Damaged cartilage must be removed if the dog is to regain normal pain-free function. The TPLO procedure itself involves the use of a curved saw blade to make a curved cut on the inside, or medial, surface of the top of the tibia. The cut top portion is then rotated to create the desired tibial plateau angle. A stainless steel bone plate is then placed on the bone to hold the two pieces in their new alignment.

The TTA surgery is an alternative for the TPLO surgery and is known to have similar outcomes. TTA is a surgical procedure designed to correct deficient stifles. In a TTA, the tibia is cut and moved forward to create stability. The TTA surgery changes the angle of the bones within the dog’s knee joint, specifically the shape of the tibia. The new position of the bone is held into place with a bone plate. Many veterinarians consider this type of surgery to be less invasive than a TPLO, but with as a newer procedure, there is not as much experience or history supporting its outcomes.

In extreme cases, hip replacement in dogs is sometimes needed for relief of pain and disability caused by severe degenerative joint disease (due to hip dysplasia or fracture). Many dogs with arthritic hip joints seem to function normally. But, when a painful joint is replaced with an artificial joint, there is often a dramatic change in the dog's personality as well as a change in activity levels.

In a hip replacement, the ball and socket that make up the hip of the dog are replaced with prosthetic or artificial joint structures. In smaller dogs, sometimes a femoral head and neck ostectomy (FHO) is recommended instead of a total hip replacement. An FHO removes the ball portion of the hip so that there is no longer bone rubbing on bone in the diseased joint.

Preventive Care is an important step in ensuring your dog stays healthy and happy throughout their life. WebMD has a great preventive care guide that looks at all the different facets that you should consider. Below are some key elements you should take care of specifically when it comes to your dog's bone and joint health.

Yes, even if your dog is already experiencing some pain from canine osteoarthritis (however, check with your vet and make sure that's what it is before getting started), daily walks are vital. They increase circulation and blood flow, help keep the joints limber and mobile and the increased muscle mass will help to stabilize and protect them. If your dog has been inactive for a long time, start slowly and build up to longer walks. Do not overdo the exercise.

Passive range of motion exercises, swimming, or even seeing a dog physical therapist will promote weight loss, increase muscle mass and help the mobility and strength of the joint. Dogs can benefit from physical therapy like ice packs and massage. Generally their coat will protect them from it feeling overly cold. Then give them a nice, deep massage, from their neck down their back, just like you would like it yourself. It will help to relax their muscles and make them feel generally better while increasing circulation to the affected areas.

Protect your dog's joints from unnecessary trauma. Great as it feels to see our big, strong dog gleefully jumping in an out of the back of our vehicle, however, such motions put major stress on their joints and can cause muscle and ligament tears or even hairline fractures. Preferably provide a ramp or stairway for the dog or help lift them in and out gently. This is especially important as they get older, as well as when they are young and their bones and joints are still developing. Take caution to prevent your puppy from jumping too much or too high and pounding on his newly forming joints; this will prevent or delay joint problems down the road.

Incorporating a canine bone and joint product, can be an excellent addition to your dog's bone and joint regimen. When looking for a product, make sure that it is of good quality and has well researched ingredients. It is also always a good idea to discuss supplementation, nutrition and exercise regimens with your veterinarian.

As far as preventive care options go, Boneo Canine® is an all natural lactoferrin-based bone and joint supplement that can help support strong bones and healthy joints in dogs.

The responsibility of monitoring a canine’s fracture recovery and rehabilitation shifts to the pet owner, when the patient is discharged from the veterinary clinic after the orthopedic procedure. Intensive ‘Canine Post-operative Home Care’ is of critical importance for the total recovery of your pet’s bone health.

The following guidelines need to be incorporated while designing a post-clinical home care regimen for your dog. 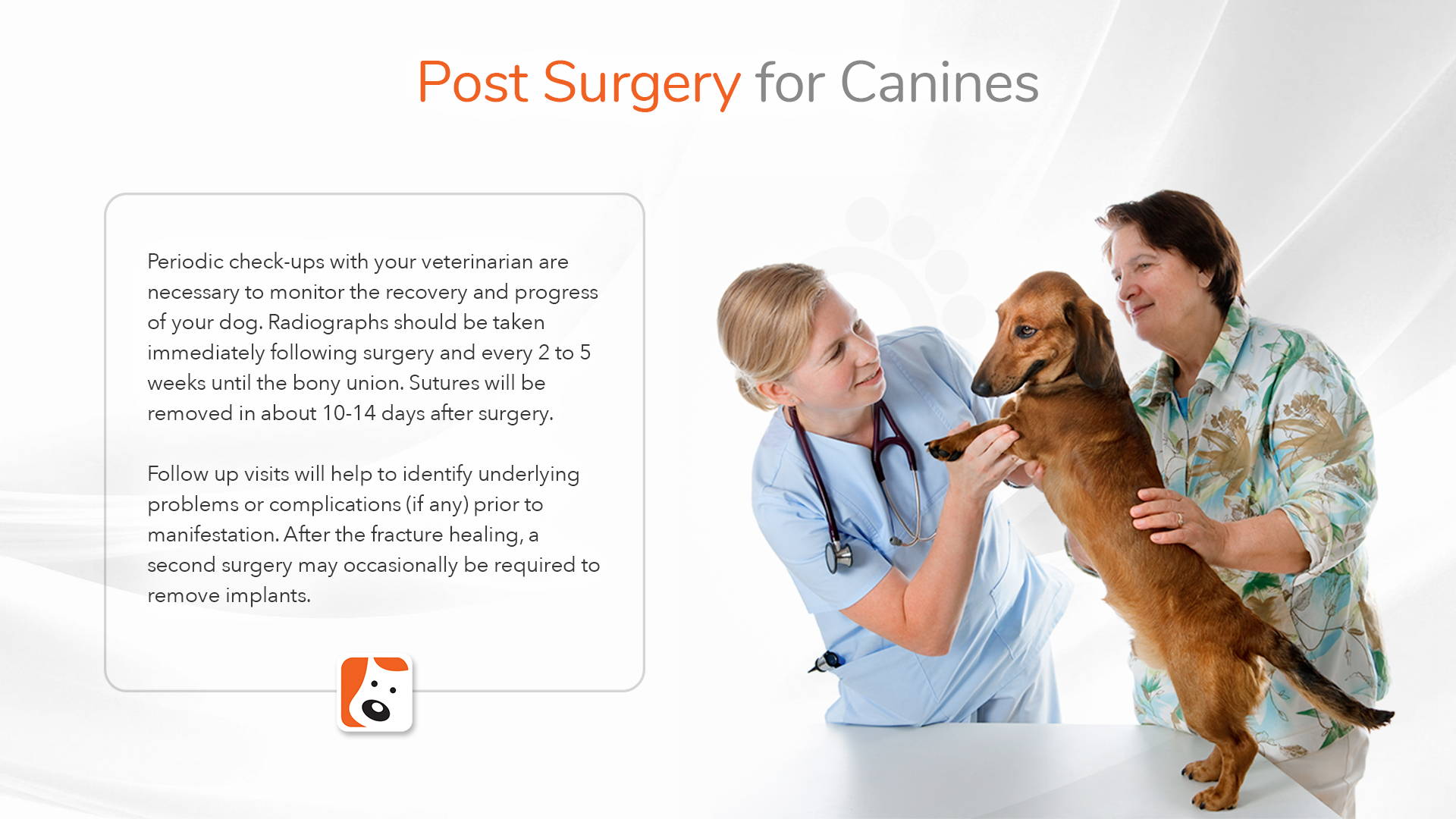 Most animals do not require analgesics post-operatively. However, surgery is invasive and animals may experience post-surgery pain. Watch your pet for signs of pain, ability to settle down, rest, and sleep. Dogs in chronic pain are reluctant to sleep for normal periods, their appetite and changes in the use of the limb are also critical signs to monitor. Continued need for analgesia after one week usually reflects a problem associated with surgery and necessitates re-evaluation. Pain and stress could slow down the healing process.

Incision site should be monitored once daily, for any signs of increased redness, swelling, or drainage/seepage. Scratching or licking the incision by the canine, delays healing and leads to a serious infection or incision separation. Therefore, a buster collar needs to be worn at all times until the staples, stitches or casts are removed.

Bandages should be changed often and use medication as directed by your vet. Keeping the affected area clean and dry accelerates fracture healing, since it discourages bacterial proliferation. In case of any suspected infection, take your dog to the clinic. If the culture is positive, antibiotics can be used according to the sensitivity. Make sure to give your dog all recommended medication timely.

Upon leaving the clinic to go home, your pet will become excited which may result in excess thirst and gulping of food. Therefore, for two days, give small amounts of food and water 3-4 times per day. The animal's diet should be of adequate quantity and well balanced during recovery.

Supplements should definitely be discussed with your veterinarian to add to the regimen during this time. Supplements can promote good health and ensure that your dog is getting enough nutrients to support their healing processes. 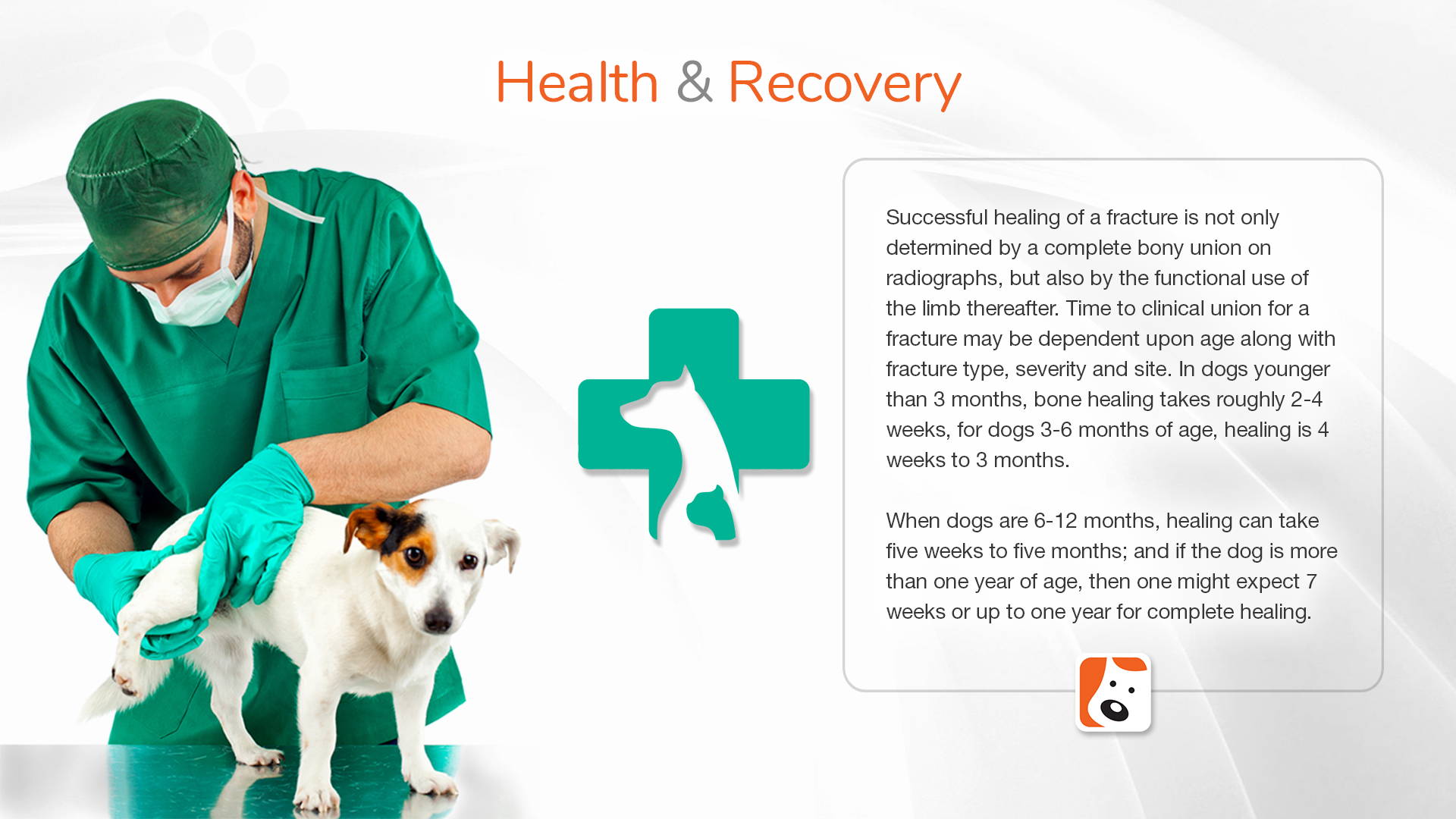 Restrict your pet’s activity during the first week of post-surgery. Surgical implants are strong but neither the implants nor the healing bone can withstand high energy or high impact movements. Small degrees of movement at the fracture line may hinder the cellular healing response. Most fractures, if left completely alone, would probably heal; however, due to any delayed union or malunion, the bone might lose its function.

Access Denied
IMPORTANT! If you’re a store owner, please make sure you have Customer accounts enabled in your Store Admin, as you have customer based locks set up with EasyLockdown app. Enable Customer Accounts